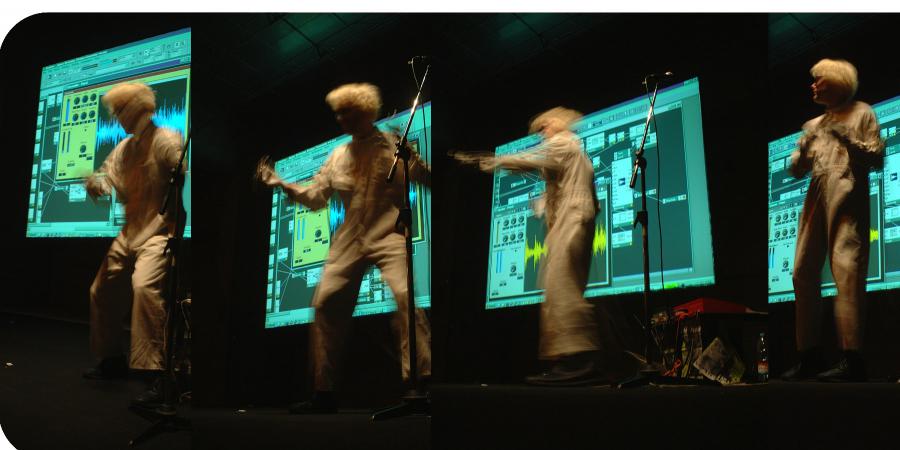 "The Evolution Control Committee is a "band", but like none you've ever seen or heard. No drums, guitar, bass, or even synth or sampler. The ECC performs with custom-built equipment to give the audience a truly original experience. When was the last time you saw a whole show performed by a guy wearing 10 ordinary thimbles wired into some electronics, which trigger everything? In the world of The ECC's music, Public Enemy duke it out with Herb Alpert while Dan Rather is the new frontman for AC/DC. It's fun without being comedy, sample-based without being techno, and brainy without being arty. Works equally well in bars or galleries!

Evolution Controlled Creations frequently engages in actions of Culture Jamming like the Napster Nuggets operation, where the stream of mass media consciousness is polluted (or enriched, depending on your viewpoint) with creative fraud. Mass media is essentially a set of filters and rules which restrict what can be seen and heard. ECC considers these rules to be a set of challenges, and if we succeed in injecting a toy surprise in the mainstream's Cracker Jack then we chalk up another win."

Have a look at The ECC catalogue (at Illegal Art). ECC predated the entire "mash-ups" phenomenon with an unholy marriage of Public Enemy and Herb Alpert back in 1996 ("The Whipped Cream Mixes" 7") ... With the Plagiarhythm Nation v2.0 album (2003) they're back with a brilliant 29-track plunderphonic cookbook of instant classics, including "Rocked By Rape" (which earned ECC a ceast-and-desist from CBS News, later dismissed)... The Napster Nuggets (since 2001) "...Meanwhile, one thing that we discovered that Napster has to offer isn't exactly a Culture Jam, but it does offer a great new way to see behind the screens... or rather, to hear what's going on in front of them..."