Goldsmith is the author of dozens of essays and poetry books that have been defined by Publishers Weekly as one of the most comprehensive and beautiful collage works of contemporary literature. He is also the author of performances and installations and was the founder of the famous archive of avant-garde online videos and free access Ubuweb. His presence in The Influencers is due to his defense of the genius without originality or, rather, of a collective originality, distributed. This is the case of Seven North American Deaths and Disasters, a series consisting of verbatim transcripts of catastrophes and assassinations broadcast by media (including the assassination of J.F. Kennedy) to see how ordinary people are able to describe at the time and live "the indescribable". From here comes the enthusiasm of Goldsmith for the networks as a territory in which the culture grows by contacts, contagions and at a speed never seen. And this situation opens possibilities - and conflicts - completely unpublished. Goldsmith's projects often generate controversy: such as when, for an exhibition in Mexico City, he asked to be sent paper copies of any web page. "Download it all!" Said Goldsmith in a gesture that was at once absurd, impossible, and politically sensible to the growing corporate control of the creativity of people connected on a global scale. Shortly afterwards, Goldsmith almost lost his job at a prestigious university in North America for having offered students a subject on "Losing time on the Internet" which, according to him, is an incredibly fertile situation of maximum attention and maximum distraction that produces unexpected results. The key is to recognize that deep down time in the network is a huge collective collaboration experiment. "It is not the end of human expression, but of the obsession that it is yours alone," Goldsmith said. His book Uncreative Writing (2011) has recently been translated into Spanish. Goldsmith is the first poet laureate at the Museum of Modern Art in New York and was invited to the White House by President Obama. He usually writes in the North American press (as in the New Yorker, for example) about a new "post-internet" culture. 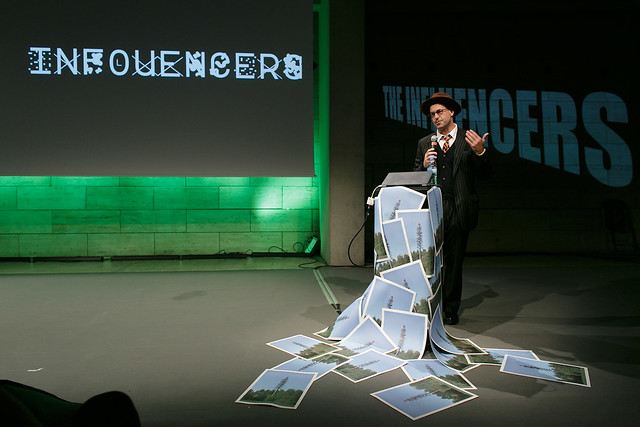